To Give Or Not To Give Away 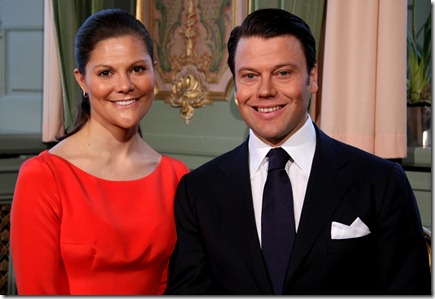 The media have been having glorious days ever since the announcement of the engagement in February 2009.

Lately, there has been some discussion about the choice of wedding ceremony. Unlike the British/American tradition, the common practice in Sweden (going back a long way) is that bride and groom walk into the church together as equals. In this case, the Swedish royal family is insisting that King Carl XVI Gustaf lead his daughter to the altar and hand her over to her husband.

The criticism from the Church as well as many others can be summed up in these words which I found in a web article:

Precisely because this wedding will be watched by millions of viewers, choosing a ceremony that reduces the woman to the role of a commodity being transferred from one owner to another is not a private matter. And precisely because it is a public affair and because we’re talking about the marriage of a crown princess aged over 30, a woman who is one day to assume the responsibilities of head of state, it doesn’t look good if she can’t walk into the church on her own.

Basically I agree but I can’t say I really care enough to make a big deal out of it. (Or did I just do that?)

Our local newspaper today again almost had me choking over my morning cup of tea:

Another matter the media has delighted in reporting and discussing is the tradition of municipalities and provinces giving wedding gifts to the royal couple; and what should be considered an appropriate gift.

Some municipalities choose not to give anything at all. They think the royal family is rich enough to buy their own bed linen or whatever. (They’re probably right about that.) Some try to find a gift connected to their own local industry (getting some advertising benefit out of it). Some I think have chosen to go with a symbolic gift to some charity project.

Guess what our town just decided? To give them a wedding gift, but keep it! Moreover, to give them something we already bought before we decided to use it as wedding gift. It can hardly even be said to be new any more, since it has already been broken and repaired…

Yes. We are giving them the sculpture “Cloned Frogs on Gala Dress”… *

But it’s really just a gesture, since we’ll be keeping it here. (Exactly where, I don’t think has been decided upon yet!)

The chairman of the local government committee says to the paper that he thinks the fact that the sculpture is a dress may represent our textile industry profile. Well, I guess it might... But then he adds:

“Besides, we all know what happens if you kiss a frog…”

In Swedish, our word for “frog” (groda) is also used to denote a verbal slip or blunder…

*The Never-Ending Story about the sculpture Cloned Frogs on Gala Dress:

Posted by DawnTreader at 19:14

I CAN'T BELIEVE IT!!!!! Never ending bad judgement and bad taste!! First I want to know this. If Sweden's tradition is that the bride and groom walk down as equals, why does the king want to overturn it??? Now that I think of it, the way we do it here in the states makes the woman look like she is owned and being given away. I much more like your way. I think they should walk down as equals, the father just wants to hog the spotlight! It's not his day, though, it's the bride's day. You don't really give someone a thing if you keep it. It's a total oxymoron, and a moron who decided this ridiculous plan!!!

i read all of your writings Monica and all that ginny said and now I don't know how I feel about the wedding walk or if i care enough to figure it out. it is much ado about nothing on the wedding gift, balderdash is an old english word that comes to mind. I think the father giving away the bride started way back when the woman was the chattel of the man, back before we could vote and there was a time, if the woman had money and property it became the property of the husband at the same time the wife did, things are different now. i think i think the bride should do what she wants but i doubt she will and the new duke to be will find he has become a part of the royals and must do things there way. i think i just blathered on and said nothing

I was retelling this blog post to my family and my sister got SO EXCITED because she's encountered some of your royal family during the Norsk Høstfest.

Also, they were all very entertained by the sculpture saga. Thank you for sharing!