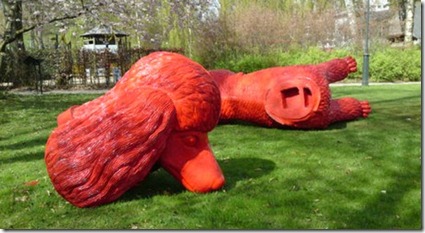 I promise, I had nothing to do with it!

When I opened the morning paper today, there they were again – the sculptures that I had pre-scheduled a post about for my blog today. If you did not already read that, please do so before you continue.

The night between Thursday and Friday, someone pushed the red poodle over, and it lost its head. I cannot say I’m surprised. I saw “concerned parents” in the park earlier in the week testing the stability of the giant dogs before letting (or not letting) their children climb up and ride them. Watching, I thought to myself: I wonder how long they’ll remain upright?

The only really astonishing thing about the article is the interview with the manager of the art museum. He is Upset with People. He says Parents must act Responsible and not let their children climb Valuable Sculptures. He also says the sculptures are placed too close to the playground in the park! Excuse me… Who exactly was it decided where to put them…??? 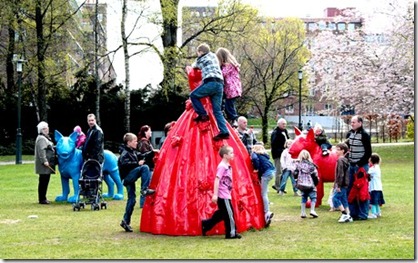 It might also be noted that there is no sign about that actually forbids climbing the statues. A sign of course would not stop the children; but just possibly might be of help to some responsible adults. (I swear that passing by, I’ve heard parents expressing concerned doubts: “I’m not sure you’re really supposed to…”)

It cannot really be a big surprise to anyone that children like to climb things like these; nor that drunken teens might find it a challenge to try their strength on them. Another sculpture was pushed into the river two years ago.

Not that there should be drunken teens in the park at night, but we all know there are: 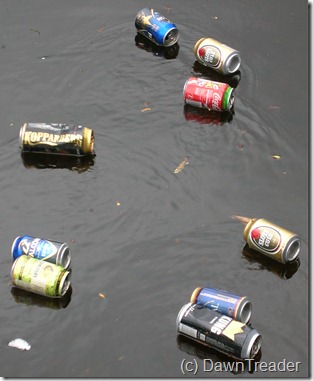 “Morning after” evidence from another weekend.

Anyways. The headless poodle (also missing its tail) has been taken away for repair, “and I’m not sure if we’re going to put it back”, says the sulking manager of the art museum.

I’m just a little bit annoyed with myself for not also getting a photo of the poodle from behind, before it lost its tail. I’m not sure what that looked like…

*The first two photos are from the web edition of the newspaper.

Posted by DawnTreader at 12:24

You tell them! I agree with everything you said. They KNOW if they put things out that delight children they will play on them. they should be warned and maybe fenced. our world has really changed since I was a child. what were they thinking is my question along with yours.

Wonder if the manager has children of his/her own? These sculptures look to kids like big toys!! They even look like that to me!
Also, it's where the sculptures are placed. To a child park and play are connected:)
Someone needs to give this manager an education LOL

Oh, your follow up post to this is just a scream!!! I agree with you completly! This manager was not responsible and seemingly lax in his duties, and just doesn't want to admit it! Prhaps fear of losing his job? A bad place was chosen to put them, and really astonishing that there's no big sign, or even some kind of little border around it all! That one boy is entirely too big to be climbing on the prom dress. But I'm surprised that the kids ddin't break the frogs off while climbing. This has given me a good laugh before leaving to spend the day in the hospital, where our friend just had emergency heart bypass.

How interesting is that? I thought that the children were supposed to play on and explore them. Even the colour suggests that. Ah well. I was going to say that the manager will have learned. But I suspect that he will not have.