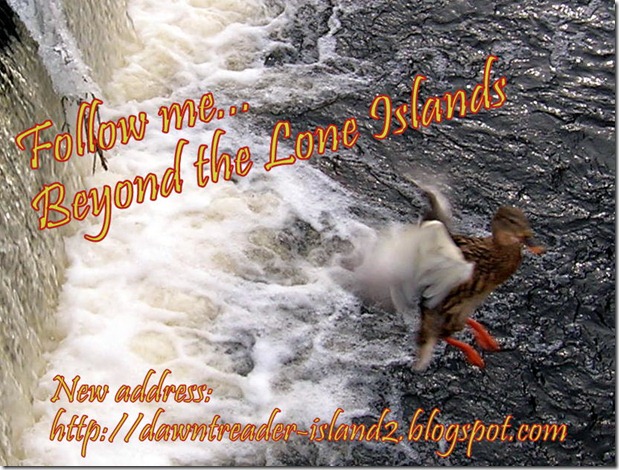 Just a reminder that this blog has moved on…
Beyond The Lone Islands
from 3 January, 2011
See you there!

Posted by DawnTreader at 18:55 No comments: 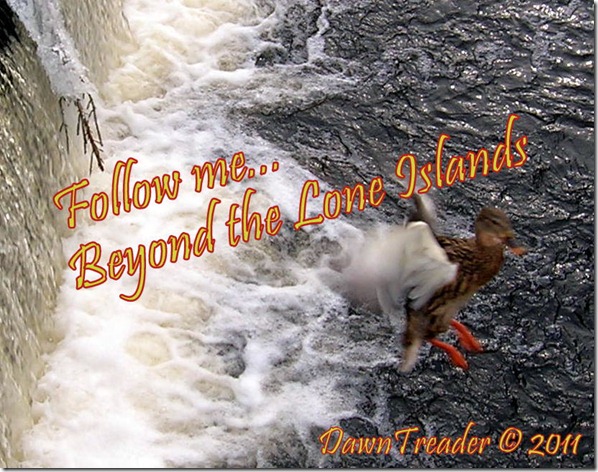 Yes, I’ve been talking about it for a while… wrestling with my own doubts… To sum up the story, I’ll soon be running out of space in my first Picasa web album; and instead of paying to upgrade, I decided to continue my two main blogs in a new account. I started with the Picture Book three weeks ago and I think that has worked out quite well so far. About 50% of the previous followers have already found their way to the new blog.

I’m a little more nervous about moving on from this one. But hey, the old posts that are already here aren’t going anywhere; that’s part of the point. There will be links back from the new blog.

We have just passed New Year, and what better time to take the plunge into “new waters”! 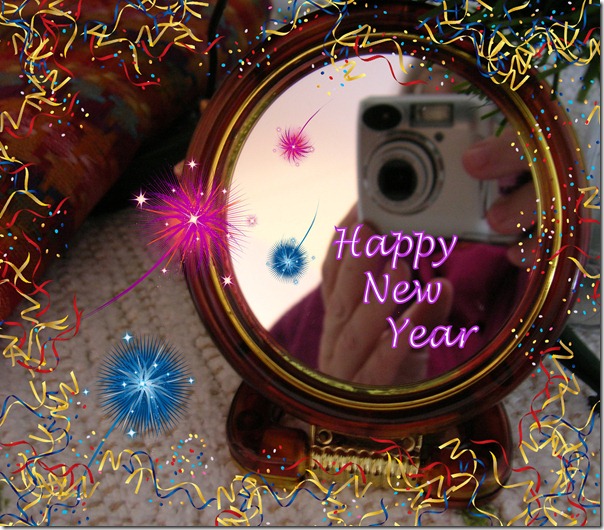 I just realized that if I’m going to wish you Happy New Year I shall have to do it NOW, because the rest of the weekend I’ll most likely be busy. Tomorrow on New Year’s Eve I’ll be having friends over in the evening; and if the snow situation doesn’t get too much out of hand, I’ll also be spending Sunday with family and relatives.

So looking back in the rear mirror on the year 2010, as well as any attempts at gazing into the future of 2011, here on the blog, shall have to wait until… well… some time next year…!

These questions made me realize that over the past year I’ve slipped out of the habit of keeping a list of all the books I read and listen to. For years I kept such a list on my desktop computer, but then that computer crashed back in November 2009… Eventually I got the old documents from it back, but in the meantime I had failed to start a new reading list. I think the problems I’ve been having with an eye (PVD and “floaters”) contributed too. I’ve been reading mostly by ear (audio books) lately and many of them have also been Swedish books not available in English; which makes it meaningless to review them here.

Among the English books I enjoyed this year, the first that come to mind are the first three novels in Alexander McCall Smith’s series 44 Scotland Street. (Link goes to a previous BTT-post of mine.)

I don’t think I find it worth the time and effort to try to recall what might have been the worst! 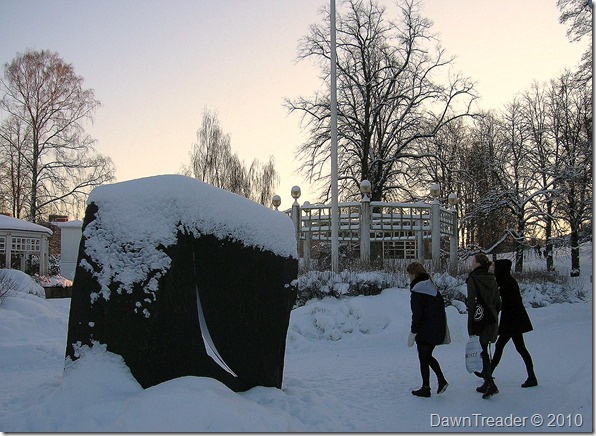 Struggling along the icy streets in town today, it occurred to me that I almost feel I don’t believe in summer any more. 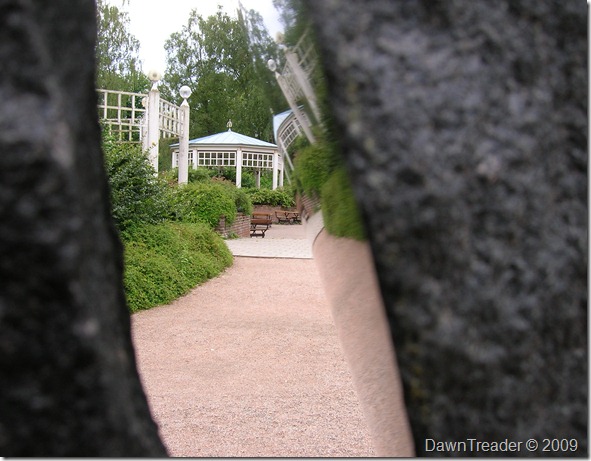 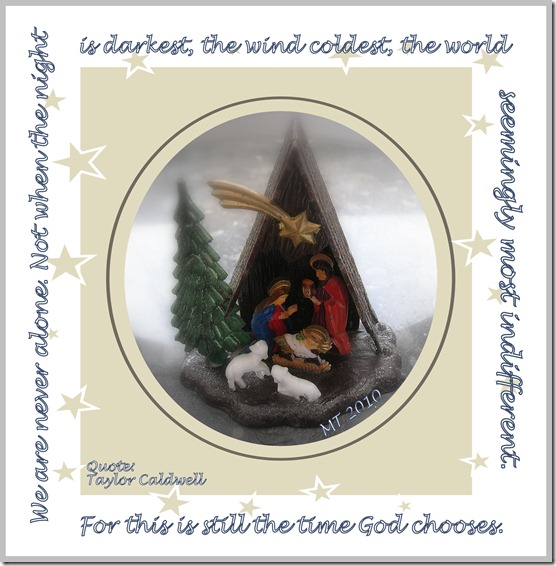 “I am not alone at all, I thought. I was never alone at all. And that, of course, is the message of Christmas. We are never alone. Not when the night is darkest, the wind coldest, the world seemingly most indifferent. For this is still the time God chooses.” 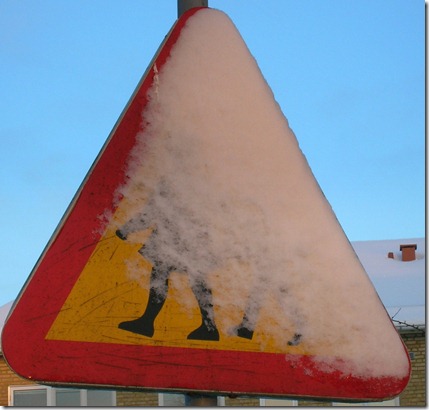 In this part of Sweden (inland from the west coast) we cannot claim to have been really snowed in over Christmas. We got a thin layer of extra snow on Christmas morning but that’s it. Otherwise around here it just basically stayed cold, -10°C plus icy winds blowing.

The really nasty snowstorms seem to have kept to the south-east over Christmas (now moving north). Down in the SE all trains were cancelled on Christmas Eve, car queues on the roads got stuck in the snow for hours, and military vehicles were needed to get home care/medical staff out to patients in remote places, etc. The main problem was the strong winds which caused the snow to drift. They had to give up even trying to clear some of the smaller roads while it was at its worst. 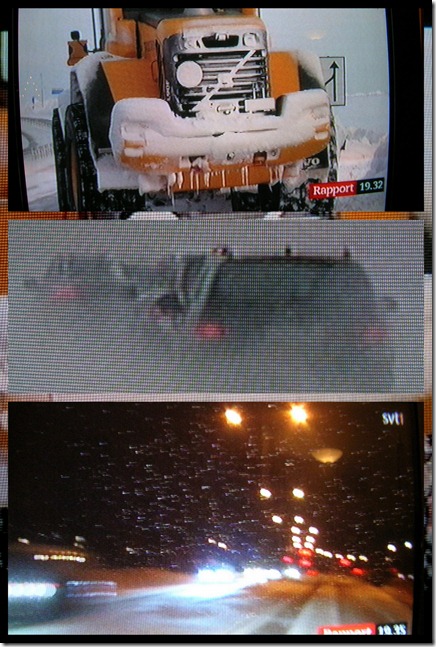 Collage from news scenes on my TV screen

Myself I even got out for a bit of a walk in the afternoon of Christmas Eve, but I have no photographic evidence of it, since I got problems with the camera card. Maybe it froze or something!  Anyway I had to format it to get it sorted and the few Christmas Eve pictures I had on it got erased. Never mind, nothing important. (And my main errand was to pick up a parcel from the post office rather than to take photos.) 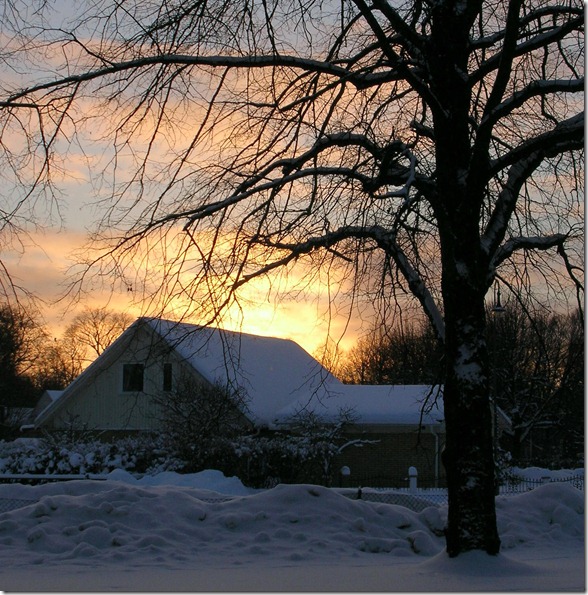 On Christmas Day I only went outside for ten minutes or so, which took me as far as the end of our street, from where I was able to take this photo of the sun setting behind a house across the road.

Today I won’t be going out at all. If I had any thoughts of it, they went away just now as I turned from the computer screen to look out the window in my study. Guess what? It’s snowing…