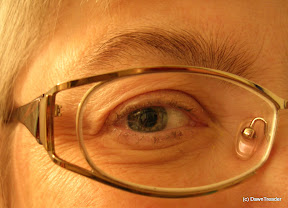 As I told you in yesterday's post, I've been having trouble with an eye for a few weeks, and yesterday I got an appointment with an eye doctor to check it out. It was a tiring afternoon at the hospital, with a lot of waiting. The answer I got was pretty much what I expected (already having sort of diagnosed myself with the help of the internet). Which in turn includes a mix of good and bad news...

With the help of Wikipedia (going from the Swedish article to the English one), I learn that in English the condition is called posterior vitreous detachment or PVD. It means that the vitreous humour  which fills the eye behind the lens (humour to me has so far meant having fun!), shrinks and detatches from the retina. This is apparently a common thing in the ageing process, and especially if you are nearsighted - which I am, and have been since childhood. One of the symptoms of PVD can be a dramatic increase in the number and concentration of "floaters" in the eye. Floaters are deposits of various size, shape, motility etc within the eye. These are visible because of the shadows they cast on the retina or their refraction of the light that passes through them. They may appear as spots, threads or  "clouds" which float slowly before the sufferer's eyes. Since these objects exist within the eye itself, they are not optical illusions but so called entoptic phenomena. (That is: You're not imagining them. They are there, within the eye.) And that is what's happening to me. I have this very irritating, dark grey "cloud" floating about in my right eye. It is especially noticable in reading, both on paper and on the screen.

The good news is that the condition in itself is not really "dangerous". There is some hope (but no promise) that the floaters might by themselves eventually drop to somewhere within the eye where they are less disturbing. Part of the bad news is that there is no treatment, and nothing anyone can do to prevent it. By the examination yesterday they were also able to determine that I have PVD on both eyes even though I've only been having this visual problem on one eye. There is also always a risk of damage to the retina in the PVD process; but I have not had any symptoms of that - flashes of light, or restriction of the visual field. (If one does, one should contact the hospital immediately. Damage to the retina can be treated with laser; untreated it can cause blindness.) The only advice the doctor could give me was - not to lift heavy things! [sigh] Well, since I'm already restricted when it comes to that (because of neck-shoulder-arm problems), I guess that little piece of advice should not be too hard to follow.

For the examination, I was given some eyedrops to dilate the pupil. This made my vision blurry for a few hours afterwards. They told me about this in advance because it means one shouldn't drive back from the doctor's. Well, I don't have a car anyway. Already being nearsighted, I had expected worse. I found myself perfectly able to take the bus again downtown and then walk the rest of the way home from there. I was glad I had thought of bringing my prescription sunglasses, though. Not only did I see better with those on (less disturbed by the light), it probably also spared the fellow human beings I met from being scared to death by the sight of my dilated pupils. Which I myself wasn't confronted with until I came home and faced the bathroom mirror: 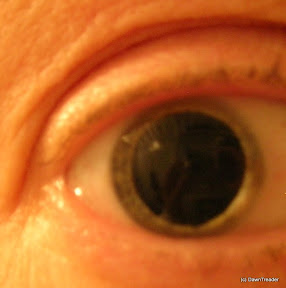 I was also very tired from all the uncomfortable sitting upright in the waiting room all afternoon. (I was told to be there at two, and I arrived in good time. Had to wait until three before I got to see a nurse, and then another hour before I got to see the doctor. Seemed to be a lot of emergencies that day.) So I ended up going to bed at 7 p.m. (eyes closed and Venetian blinds drawn) to listen to an audio book for a couple of hours before I went to sleep.

This morning, my eye size was back to normal. (First picture.) But the cloud is still floating about... And it does make me tired. So I guess I will have to include this too "in the picture" when trying to adjust (again) my daily schedule. Taking breaks to rest my eyes as well as my neck etc.

Should add that I have less trouble watching TV than reading, because then I usually don't have to move my eyes over the screen so much, but can sort of park the cloud at the right corner of my eye.
Posted by DawnTreader at 11:12

My goodness, girl. That picture of your pupil would definitely cause me for concern if I didn't know it was intentional. It reminds me of a cat's eyes :)

I've heard of that cloud and PVD - there are a few people that I've known who have had to deal with it. Quite bothersome with the clouds. I like how you wrote that you "park it in the corner" :)

Suffering with different ailments is such a nasty bother!! I, too, have a list of my own. Maybe I should take them into account more often than I do, in order to take better care of myself...but I tend to be a bullhead in some areas (like when moving furniture around, picking up my "not so" little man for big hugs...etc.)

Hope you find the clouds drifting by less and less.

Yes, Monica, I wondered if it was floaters. I know people who have had that problem. I have them but they are not usually an issue, thank heaven. I hope that they sort themselves out and cease to trouble you.

I've never actually seen a pupil quite that dilated! A bit scary really.

I thought that is what you had when i read your post, but did not mention it. My dad had it for years and his did get better. He died at age 93 and his sight was still fine. I know from his description that it can be very aggravating at times, especailly reading. I beleive you will be fine, and i pray it will settle down where it does not bother you. My question is, how on earth did you take that close up of your eye? both of them? last month I looked at my dilated eyes in the mirror and thought so this is what a drug addict looks like. I was able to drive home with sunglasses on, the blur was close up, like seeing the dashboard, off at a distance was ok.

Oh man. My eye doctor has been trying to get me in to dilate my eyes for two years, now. I'm scared of that mirror-view afterwards; really dilated pupils always make me think of vampires for some reason...

(Glad to know it's nothing too serious!)

Thanks all for your sympathies and encouragement. Yes... I did a bit of research myself on the internet before I called the eye clinic. Didn't seem too worrying at first, but then as I continuted reading about possible damage to the retina etc... I decided it would probably be safer to let an eye doctor have a look instead of just making my own diagnosis.

Rae, the examination as such is really nothing to be scared of. They gave some painkilling drops first. And I assure you the dilating effect passes... (And also did not make me thirst for blood!)

Sandra, about the photos: I just put the camera on macro mode and turned the lens towards me (not towards the mirror). Had to take a few shots to get the distance right; and then some cropping in the computer. I thought I should at least get some "fun" out of the whole experience!

First, let me say that you have very pretty eyes! I have had the floater problem as well, and am glad that it was nothing worse, although very annoying! It's a constant reminder of your condition! When I read, of course the floaters move back and forth with the lines on the page! About Jakob Ammann, in the 1600's he split the church for many reasons. He wanted foot washing, more frequent communion, and he wanted people who left the church to be shunned. Many years later, he was sorry he did this, and tried to reunify everyone, but it was too late. He even offered to shun himself from his own church! Duh!!

Eye floaters also known as vitreous floaters which fill up the back 3/4ths of a person’s eye and hence one can observe small shadows on the retina. To individuals eye floaters appear alike tiny flecks, cobweb or cloud-like formation. There are two ways for removal of eye floaters known as vitrectomy and
laser Treatment. Laser treatment is more accurate than vitrectomy. For more details refer eye floaters treatment

Because of the lack of profile behind the comment above I suspect it might be spam rather than personal info. I'll leave it, though. But as far as I've been able to understand, our hospitals do not treat this condition unless symptoms are also indicating damage to the retina.

I believe that you're correct about that last comment. Once, I wrote a post about my dad's knee replacement surgery and I received a comment very similar that actually led to an institute sharing information about it. Nothing that I really needed research for in that extreme but I think that the google bots are sometimes shared or picked up upon by larger businesses through keywords in our posts.

Sorry for your troubles. My brother-in-law had detached retinas in both eyes some years back and they did laser surgery on him and he has been fine ever since. My own eyes have been prone to feeling "tired" of late. If I were sane and sensible, I'd go to the doctor, but, alas, I am me.

I hope your eyes feel better and that you are able to stablize the problem where it is. I'd be glad to do some reiki for you. Email me if you're interested.