About Me and Languages (2)

Before I go on with the British influence – a musical interlude…

In 7th grade (~ 1st year of 'junior high') a second foreign language was introduced, either French or German. I chose French, probably strongly influenced by my parents, who were not too fond of German. In 9th grade, all former school classes were broken up and we were divided into new ones according to what kind of school we intended to go on to after that. My aim was to continue to focus on languages.

9th grade for me included several new friends and new discoveries. With my two best friends during that year, I shared a deep passion for Simon and Garfunkel. Not only did we listen endlessly to Bridge Over Troubled Water, Sounds of Silence, Parsley Sage Rosemary and Thyme, Wednesday Morning 3 a.m. and Bookends; we also analysed the lyrics. Wrote them down from listening, looked up the words, pondered over the meaning. Bob Dylan, Leonard Cohen and Joan Baez were other favourites. 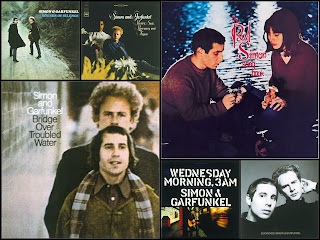 We also worked together on a school project about the Vietnam war. It was a year of increased awareness of the world, and deep thoughts about the meaning of life. Gospel music also came into my life during that year – one of my new friends was a member of a gospel choir, and I went to some church concerts to listen. Also, the Rock Opera Jesus Christ Superstar was released, and contributed to thoughts and discussion. It should perhaps be mentioned that my family weren't churchgoers. I was baptised as a baby in the Church of Sweden (Lutheran state church - nowadays separated from the state but that did not happen until the year 2000) and "confirmed" at the age of 14, because in those days nearly everbody was. But aside from that, we never went to church. During 9th grade and the following summer, however, I went from sort of agnostic to atheist back to agnostic to believer. I'm getting a little ahead of myself here, but not really off topic. Music and the church were, and always remained, important for my continued interest in and use of the English language.

To illustrate, here is Mary Hopkin with the song International from another of my favourite albums from the early 70s – Earth Song/ Ocean Song. (YouTube)

Posted by DawnTreader at 16:08

Yes I think we of that generation tend to be. I case of age in the mid sixties. Apart from the inevitable groups like Queen and a few others I then 'left' pop/rock music for 'classical' until I came back to it in the current decade.

Another interesting and informative glimpse into your life. I'm enjoying this.

Dawn Treader...one thing for sure...we are right in tune with the music. My favorite artist above all is Bob Dylan. His lyrics have always spoken to me like no other. Also Simon and Garfunkel are another favorite of mine. I met and Swiss boy (at that time a boy of about 18) in Barcelona and traveled with him to his home in Geneva. He also learned English from the music of the day. Thanks for a great post and I do miss the late 60's...it was a time like no other.