About Me And Languages (1)

One or two Followers have wondered about me and languages. So I thought maybe I should fill in a few more details about that. I will do this by installments, so as not to tire either myself or my readers out… 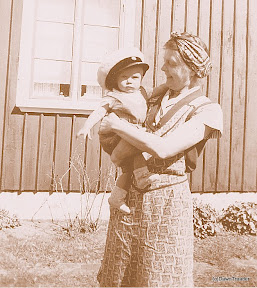 Born to be a student!
(Me 9 months old, wearing student's cap.
It's my grandmother who's holding me.)
I am Swedish, at least four generations back on each side of the family, which is as far as I have any facts. Three out of my four grandparents had their roots in South West Sweden. The fourth moved down here from far up in the North.

My first contact with the English/American language was when I was six. (We also didn't have television until about then.) Then we had relatives from Illinois USA coming to visit - a cousin of my grandmother, and her husband and daughter. The daughter, second cousin of my mother, was only a few years older than I. There are pictures of us together drawing pictures and hugging teddy bears, and I remember her giving me American chewing gum. How else we communicated, I cannot really recall. 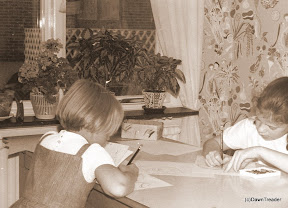 (Me on the left, my American relative on the right.)
I started school at the age of 7 but could read (Swedish) before that. English lessons began in 4th grade. My mother was good at English, she used to read novels in English herself and started early to encourage me to do the same. I was probably around 13 when I started reading Agatha Christie mysteries in English; we had a few of those at home. I also had penfriends in other countries. (In those days, contacts were made through ads in magazines and comic papers.)

When I was 14 (and my brother 7), our family went to London for a week in July, and saw all the sights: The Thames, Buckingham Palace, The Tower with the crown jewels, The Houses of Parliament, Big Ben, 10 Downing Street, Madame Tussaud's Wax Museum, The Planetarium, The Zoo,The British Museum, Trafalgar Square, Piccadilly Circus, Westminster Abbey, St Paul's Cathedral, Royal Albert Hall, Regent Park, Hyde Park… Also the Sherlock Holmes museum, the Royal Observatory in Greenwich, Hampton Court with its maze, Windsor Castle, Stratford-upon-Avon with Anne Hathaway's (Shakespeare's wife) cottage, and Agatha Christie's play The Mousetrap (which had been running for 17 years by then – and is still running, I think!) 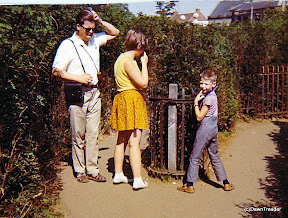 In the Hampton Court Maze
Wow. Did we really do all that (and some shopping) in a week? According to my photo album, we did. I don't suppose I personally had a lot of conversation opportunies during that week; but it did lay a firm foundation for my continued fascination with all things British…
Posted by DawnTreader at 14:06

Thank you. I can tell that I am going to enjoy this little autobiography.

Dawn Treader...really interesting. I know if you are exposed to a 2nd language enough...one begins to be able to use it. But I also know there is a talent to actually use a language conversationally and you have that talent. Do you speak English with a British accent? Just curious. I have forgotten so much French now, not having used it for over 30 years but I am sure even when I was fluent...I spoke French like an American speaking French...I am sure it was obvious that I wasn't French. Your command of the written English word is flawless...I admire you for that.

By the way...Zach was telling me that they are making a new movie (maybe Disney) of "The Hobbit"...

Yes Dan, I do speak with British accent. More information will follow, this was only the first installment of... well, I'll leave the number open for now...

GB, glad to have caught your interest, too! :)

You write so well I wouldn't have guessed English wasn't your first language. I wish I had your talent.

This is so interesting. I love reading about people's lives.You definitely have a a talent.