The Return of the Gnomes 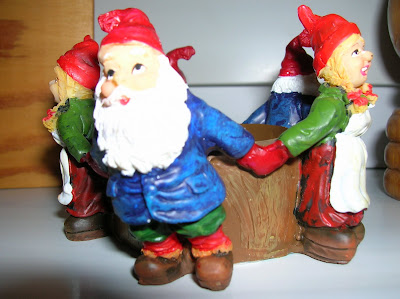 I mentioned in a previous post this week, about my "issues with Santa", that for a number of years I more or less banished all Santa or tomte/gnome figures from the Christmas decorations in my own home. This was from when I moved away from home at the age of 20 and a number of years onwards. It wasn't really that I got fanatic and threw a whole bunch out - I just didn't invite any to move in with me!

In my birth family, church visits, crib, Bible readings or hymns, were not part of our Christmas traditions (while Santa/gnome figures were). When I became a Christian (at the age of 16), and when I got my own home a few years later, I wanted to shift focus. However, I always spent the actual Christmas with family, and for the first 1½ decade I had to travel to do so. That's one reason why the time of Advent became "my own" Christmas celebrations; while the actual holidays remained sort of a separate and secular family event. This probably contributed to keeping the gnomes away from my flat, too... The place was empty at Christmas with no food in the larder for them and not even a Christmas tree!

Then I moved, and then my parents moved too, and habits changed a bit. I spent more of Christmas in my own home, and sometimes also with single friends. One next-entrance-friend who fills her own home with myriads of gnomes at Christmas found my Santa/gnome-free Christmas a bit odd. One Christmas I got a package from her which contained  a candle-holder surrounded by five little gnomes. A note came with the package: These gnomes claimed to be refugees looking for a home... What could I say? That there was no room for them at the inn?! Of course I had to let them stay...

As you might guess, once you let more than one gnome into your house (and especially of course if they are of opposite sex, as these were - see the first picture above), they multiply...! 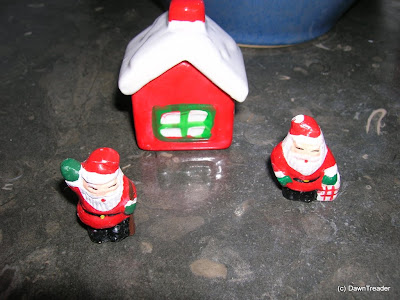 As revenge, next time my friend went away for Christmas and left me in charge of her potted plants and Christmas tree, I planted half a dozen extra gnomes around her flat (in places you would not normally put them). Then of course next time I went away and left her in possession of my key... well, surprise surprise... some of them had come back to me...

Now last summer I moved away from her, and we no longer have keys to each others' flats. That might possibly have stopped the gnomes from migrating back and forth between us, but I'm not entirely sure it will stop new specimens from appearing...!

I still don't allow my gnomes to come up to the flat until just a day or two before Christmas though. Until then they have to stay in their box in the cellar. They may then stay until after New Year, when my former next-entrance-neighbour still usually comes to visit...

Posted by DawnTreader at 23:21

It's good to see and hear the traditions from other cultures.