A Childhood Favourite: The Borrowers 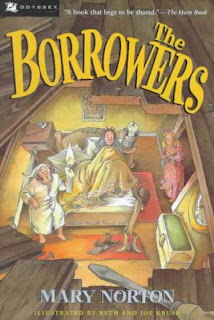 Rae had a blogpost the other day about Childhood Literary Loves, especially series of children's books. It turns out I share several of Rae's favourites; but one other that came to mind for me, was Mary Norton's The Borrowers. I actually reread those books earlier this year (some time in the spring) and intended to write a blogpost about them back then, but never got round to it. Doing it now instead!

To start with the reason why I reread The Borrowers, that was because last year for Christmas my brother gave me mp3-copies of Terry Pratchett's Bromeliad Trilogy, about a little people called Nomes. Listening to those books, it struck me that hey, he borrowed rather heavily (though amusingly) from The Borrowers...!

Then it struck me that I never actually read The Borrowers in English; only in Swedish. I still have my Swedish copies of the first four books. Checking with my internet bookshop, I found that there was a The Complete Borrowers pocket edition available which also included a fifth book, written twenty years later than the others; which probably explains why I had never even heard of that one. So I ordered the Complete edition, and read the whole story for the first time in English. As so often when reading in the original language something I've only read in translation before, that included some new discoveries. On top of a good story, I noticed she also uses the language beautifully, with lots of details (and quite a few words new to me); and also some puns that don't translate into Swedish at all... Like the Borrowers using the name "human beans" for "human beings"!

Borrowers, in case you don't know, are a little people, more or less on the verge of becoming extinct, so there aren't many of them about any more. They live under the floor or behind the walls in big people's houses, preferably close to the kitchen or dining room, because they live on what the human beans leave lying around. That's why a lot of small items around the house just keep mysteriously disappearing - like needles and safety pins and handkerchiefs and balls of yarn and things like that, which you can never find when you need them. Even the Borrowers' names seem (in our ears) borrowed. When the story begins, there is just one family of Borrowers left in a big old house - 14 year old Arrietty with her parents Pod and Homily; with surname Clock, because the entrance to their home is behind a clock.

The greatest fear of a Borrower is to "be seen" by a human bean. One day, this happens to Arrietty - she is seen by a human boy coming to stay with his old relative. Not only that - she makes friends with the boy; a friendship which for a while has its advantages, but in the end... Well, let's just say it leads on to new adventures for the little family, because the first book (first published in 1952) was followed by three more (published between 1955-1961), entitled The Borrowers Afield, The Borrowers Afloat and The Borrowers Aloft - and much later (in 1982) The Borrowers Avenged.


From the titles alone you can draw the conclusion that the family did not stay forever in the house where we found them in the first book. (Neither do Terry Pratchett's Nomes, and that's where it becomes really obvious that he borrowed from the Borrowers; because his little people also leave their Indoors life to go Afield, and then Aloft; although you might say they go about it in more modern fashion than Mary Norton's characters...)

One of Mary Norton's skills in her story-telling lies in her ability to really imagine what it must be like to be the size of her borrowers - especially when they move outdoors.

Arrietty filled the tin-lid quite easily by tipping a large pointed fox-glove leaf towards it so the rain ran off and down the point. All about her was the steady sound of rain, and the lighted candle within the boot made the dusk seem darker: there was a smell of wildness, of space, of leaves and grasses and as she turned away with the filled tin-lid, another smell - winy, fragrant, spicy. Arrietty took note of it to remember it for the morning - it was the smell of wild strawberries.

Posted by DawnTreader at 20:06

I've never read this series! I'm intrigued. I will have to investigate!

PS: Thank you for mentioning me!

Dawn Treader...what an interesting story! It sounds like this would be a perfect Stephen Spielberg movie. I am surprised that no one has bought this to the silver screen. Thanks for the review..I will have to look it up.
Dan

Somehow I missed those books when I was a kid. I did read all the OZ books.

Dan, the story has actually been filmed a couple of times, both for TV and the movies, but I don't think either one ever became a really huge success? I think I saw some version of it on TV years ago but I can't remember which one, only that it did not measure up to my memories of the books.

I've never read The Borrowers (though I have, of course, read the Bromeliad trilogy by my favourite author). I sometimes read children's books that I have not read for years and thoroughly enjoy them so I guess it's time to give Mary Norton a try as well.

Dawn,
Thank you for the "follow" of ART NOTES.
So what is the procedure for a direct link like you do to "My other Blogs" in your right column?
You didn't have any idea how limited my knowledge is about blog codes, did you?? Thanks for writing me about this!

Dawn,
Thanks so much!! Sometimes I don't know that I know:)