A few weeks ago, I reported that our Town council had decided to give away (and yet keep) the [in]famous sculpture Cloned Frogs on Gala Dress, as a wedding gift to our Crown Princess Victoria and her husband-and-Prince-to-be Daniel. (The wedding takes place this Saturday.)

This story seems to just go on and on... Today the newpaper reports that the artist (you know who) decided to make a miniature, and donate that to our Town, in order for the Town to actually pass that one on to the royal couple.

Actually, for a miniature it's rather big. The Town representative who is supposed to take it to Stockholm and give it away was a little taken aback when it arrived. He seems to have been thinking he would be able to just put it in a bag... 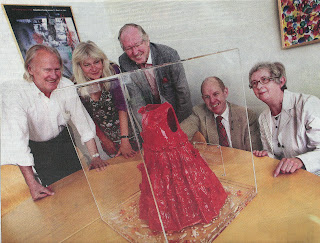 Picture scanned from the newspaper.
What the paper does not comment on is the fact (to me rather obvious!) that this "mini" is not at all an exact copy of the bigger statue.  Take a minute to compare: 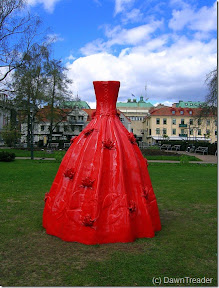 Do you see what I mean? Look at the waistlines. The new one seems to be made to "grow" in...

I hope for the royal family's sake that they will be able to find some obscure nook of the castle to put this in, where they don't actually have to look at it every day. I would also really like to know (or on second thought - perhaps I wouldn't!) how the minds of our local politicians work. As for the artist, well... I still suspect that he is his own biggest fan, and loving all the publicity.

We have another sculpture in town that has been here for a few years now: Bodhi. I think on the whole he is rather popular. He has however also become a popular target for student pranks. Because he is not really easy to get to - standing in the river as he is - I guess it has become somewhat of a challenge...


Last year, someone put a wreath of flowers on his head: This year, he was decorated with a graduation hat: 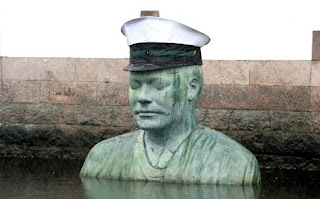 Photo from the newspaper

Last year, that wreath remained on his head for weeks. But this year - with sculpture festival and all going on - he was not allowed to keep the hat... I only saw the hat in the paper, so I borrowed their photo.
Posted by DawnTreader at 11:15

Well, all those people surrounding the new minature certainly seem to be laughing at it!! The dresses are so different, the new one being even uglier, if that's possible! The big one was off the shoulder, the new one has a top with sleeve holes. Perhaps the newlyweds can use it to decorate their doghouse!! If they have no dog, they certainly need to buy one now. I get so tickled when I see any of these posts about this artist, the story itself is now like performance art!!

first i will say, i kind of like the man in the river statue, he is very interesting. second I must say What Is He Thinking? I mean what in the world will the royal couple DO with this ugly little not so minature? mabye they have a room in the dungeon (do they have dungeons?) in the castle that they keep all the gifts they get. you are so right about finding an obscure nook for it. he is way to full of himself with this one.