The other day when passing the park in town, I noticed that the red dress sculpture was missing again. I almost wondered if they had shipped it away to Stockholm after all…

Yesterday, however, I found it again. Outside the library this time. In a yard with gates that can be locked at night. 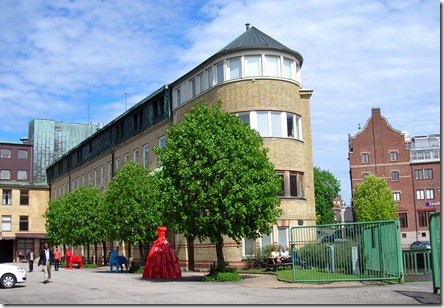 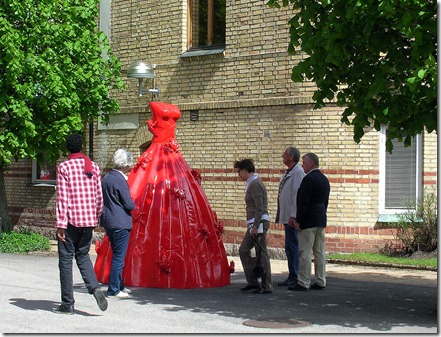 I was not the only one who had gone looking for it. I heard these people (or possibly some other people) mumble: “Oh there it is… Couldn’t they at least have put up a sign in the park where they had moved it to?!” 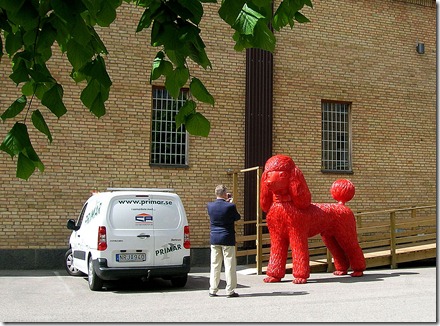 To me, the way they are lined up now looks rather like someone said (in a very tired voice): “Oh never mind, just put them down somewhere… We’ll probably soon be moving them about again anyway…”

1. Australian A temporary return to traditional Aboriginal life, taken especially between periods of work or residence in modern society and usually involving a period of travel through the bush.

3. Chiefly British A public stroll taken by an important person, such as a monarch, among a group of people for greeting and conversation.

Posted by DawnTreader at 12:00

when i saw your title I thought Crocodile Dundee, one of my all time favorite movies. I go walkabout a lot, and so do you. you have THE most amazing buildings in your town. I love the shape of the one with the red dress, sorry but I think it is UGLY. and so is the dog. don't tell anyone i said that. keep taking these photos, i study each one to see your country and am loving my tour.

I think I originally picked up the word "walkabout" from the Australian TV drama series The Flying Doctors ;)

That dress DOES get around, especially for having no one inside it! Do you think they are moving it to give more people a chance to see it? But here's what strikes me about this post. Your library. I love the shape, it is rounded at the end. And now that I think of it, quite a few of your buildings seem to be round or oval. I just love it. I love round shapes in everything and I attend a totally round church. It seems like your architecture and your art life are just wonderful!

Ginny, I think they moved it because they finally realized it was insane have a security guard just stand watch over a sculpture in the park all night, every night... LOL

The building where the library is now (temporarily, while its ordinary home is being renovated) is an old factory building. I think the shape of it is pretty unique. But we have a number of old brick buildings from a century or more back which I think are really impressive, each in its own way. It's like they really took pride in architecture back then, and even factories were decorated with that "little extra".