About Me and Languages (8)

I mentioned in the Finding the Library post the other day that back in my teens I had in mind for a while to become a librarian. But when it was time to make a career choice, I was told that job opportunities weren’t looking good.

Writing that down, I was reminded that I might as well be getting on with the next chapter of my autobiographical Me and Languages series. You will find links to previous episodes in the sidebar, below the Blog Archive.

After graduation from 'senior high' school, I had a gap year. (A word I very conveniently learned only yesterday from a novel I started reading, or I wouldn't have known what to call it!) That is: unable to decide what kind of career I wanted to pursue, I took a year off from studies, and got some experience from working life instead. I got a job in an office, working for an electricity company. 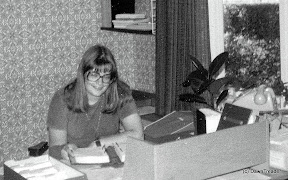 Still living at home, but now with driving license and frequent access to the family's second car, my mum's Renault 4: 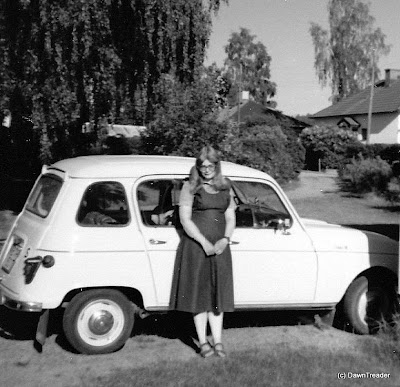 As it happened, I found that working in an office suited me rather well. So a year later I applied and was accepted to a secretarial education, lasting 1½ years. This involved 'leaving the nest' and moving to another town, and into my first own flat. (Yay!) A very small student's flat, and lacking a proper kitchen, but it was a separate flat, not just a room in a "corridor". And very conveniently situated in the centre of the town.
This education was a new construction, including six months of University English, while the rest of the course took place at a secondary school and included business languages (Swedish, English and either French or German), typing, shorthand (in all three languages) and basic business economics. My third language at school had been French, but I chose to go on with German (my fourth language) instead. The University course - the mid one of our three terms - was not especially adjusted for business life but included all the usual stuff - phonetics, grammar, literature, and facts about history and modern life in Britain and the US. During this term we also still had some typing and shorthand classes at the other school to keep up those skills.
Looking back, I don't really understand when I actually found the time to study. I know I must have, because my certificate proves it. But judging from my photo albums I was busy with all kinds of other activities during these years - also getting involved in a new church, and a gospel choir, and making a whole bunch of new friends there too, besides my classmates with whom I also spent time out of school hours. A boyfriend was also in the picture for a while.
Well. I had no television that first year, and there were certainly no computers around!
After the first year, I found a bigger flat. I sort of outgrew the first one because of always having lots of people coming over for tea and just "hanging out". And I enjoyed that social life immensely!
So much, in fact, that when I finished my studies, I did not want to break up and move back "home". Or anywhere else.  So I stayed on where I was, even though this meant to keep going from one temporary job to another for the first couple of years.
The first job, lasting for a couple of months, was as secretary/sales assistant at a paper mill. I have shared some memories from that place of work before, in a post entitled The Miracle of Printing. 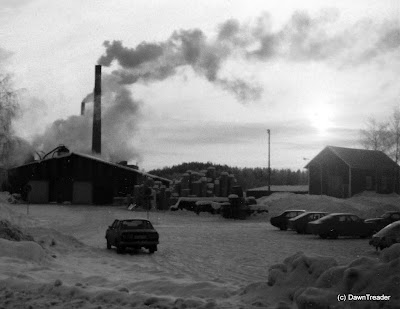 In that job I had use of all three languages, including shorthand in all three. It also gave me some valuable experience which helped me get other jobs later on, within the same line of business (pulp and paper industry). Whatever I've been working with I've always been interested in learning more about it. At this place, they showed me around the mill, explained how things worked, and taught me about things like different paper qualities etc.
A few months and short term temporary jobs later, I got a job for a construction company designing machinery for pulp and paper industry. There, too, I had use for all three languages, and shorthand. I worked there for about a year. After that, I moved on to become personal secretary for the managing director of a consulting company within the same line of business.  I remained in that position for three years (although the company itself went through some changes). After that, I decided to go back to school again. But that will be another chapter.
(The photos from these years are of very poor quality and almost all colour has faded out of them. Trying to scan and edit a few of them, I find that they come out best in black-and-white. There are very few photos from work or school.)
Posted by DawnTreader at 00:25

Well, the pictures are great and very interesting. I wish I could have clicked to enlarge them. Your short (too short) bio is very interesting, then you just left me hanging! Sort of like a cliffhanger in a good movie! I will look forward to your next installment.

I am finding your life so interesting to read. Thanks for sharing.

I'm writing this sort-of-biography from a very limited focus - the thin red thread of languages. It's not the complete story of my life.

Dawn Treader...I am still amazed at your grasp of the English language. I spent 6 years trying to learn French and was never at your level.

Dan - Thanks. One of the things I'm trying to explain through this series of posts, though, is that by now I've really been spending about 45 years learning English! ;)

I enjoy these autobiographical posts immensely and never cease to be amazed at your linguistic abilities.

Your language skills never cease to amaze me! I love hearing how you managed to hone them.

Rae - you just added another word to my vocabulary! (hone) ;)
Great to see you back btw, I missed your comments while you were away.

Fun post. I enjoyed the personal history. I toured a paper mill in my late teens, my uncle worked there. I've worked in a print shop, and I've done hand book-binding. It's an interesting industry: paper. Who knew? (Secretarial duties in three languages: impressive!)