About Me and Languages (6)

Again connected to my scanner (after a computer crash in November), and looking for just about any excuse to take a mental break from the cold weather outside, I decided to pick up and continue my sort-of-autobiography.


For new readers: This is a trip down "Memory Lane" that I began last year, and you will find links to previous episodes in a separate box below the Blog Archive. 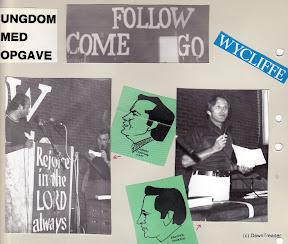 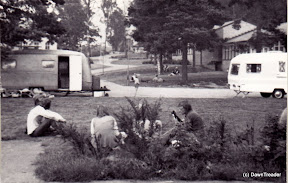 In the summer of 1973, a month before I turned 18, I went on my next international adventure, although this time I did not actually leave Sweden. It was however the first time I went alone to a big international Christian conference. (I had turned to a personal Christian belief two years before.)

The conference language was English, several mission organisations were involved, and people from different countries attending. The focus was on Eastern Europe, where active Christians were in those days persecuted for their faith by Communist regimes.*

The conference was held in a village by the name of Dals Ed. Sleeping arrangements were simple - camping, or sleeping on air mattresses on the floor in the local school. The days were filled with Bible studies and meetings, mostly outdoors. It was a week of beautiful summer weather, in a beautiful spot.

I went alone to this conference, which again (like the stay in England the previous summer) was a valuable experience because it meant having to be open to new contacts. Most of the participants were from the Scandinavian countries, but all Bible studies and sermons were held in English. (Public sermons were also interpreted into Swedish.) This for me laid a foundation for learning to listen to the English language. I also bought tapes from some of the meetings which I listened to again afterwards. This conference also introduced me to the abundance of Christian literature in English. This in turn also laid a foundation for continuing to read such books in English, and to learn the theological terminology in English as well as in Swedish. 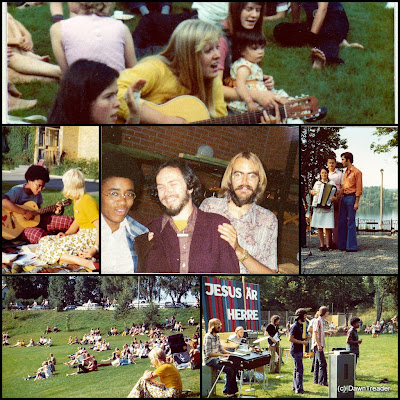 Music is important to almost every teenager. Music has also always been important in the church, all over the world. So naturally, music also played its part in this conference. It was the early 70's, and the Jesus movement brought a new type of music into the churches - simple praise songs, with the lyrics often based on direct quotes from the Bible, and also influenced by gospel music. To lead us in praise at this conference, there was a band from the American west coast - I can't remember now whether San Fransisco or Los Angeles. Anyway, they called themselves The Harvest Singers, and they were a bunch of really Cool people - and nice. I remember spending an afternoon sitting on a lawn in the sun, just talking to one of the guys - his name was Lee - for perhaps two hours, something like that. What we talked about, I can't remember. What I do remember is the feeling: A member of THE BAND, a really cool-looking, long-haired, guitar-playing American young man (in his early 20s, I guess)... talking to ME, out of all the people there... *LOL*

One thing he said, still lingers with me. That was on the last day of the conference, saying good-bye. He then said, very matter-of-factly:
If we don't meet again before - "I'll see you in heaven"...

One short phrase that just hit me, and never left. Somewhere at the back of my mind, there is still an image of heaven as a sort of reunion conference: a place where mysterious things will be explained, beautiful and sincere songs of praise sung, and we'll have all the time in eternity to finish all those conversations we had to leave dangling on earth...

*Footnote: I should perhaps add, that although this conference focused on mission in Eastern Europe, and working against the unjust treatment of Christians by the authorities in these countries, the teaching was not at all (in my perception) aggressive. In fact, I think it probably gave me a better understanding of the original ideas of Marxism and socialism than I ever got from any lessons at school.
Posted by DawnTreader at 09:00

Maybe heaven is like Woodstock w/o the mud! Nice story.

Dawn Treader...I love your autobiographical posts...I should try that as well. I am still searching for the right spot in the Christian world...I am planted there but my laziness keeps me from exploring farther...thanks for the push!

This is just a great post! My parents have a very similar story about the power of music in their faith. What an interesting connection!

Nice post. I lived in Anaheim (near Disneyland) in the early 70's. Calvary Chapel in Costa Mesa was one of the most influential in the Jesus Movement and new music. Interesting to hear of your similar experiences so far away.

I always enjoy your autobiographical postings.