The Art of Dribbling 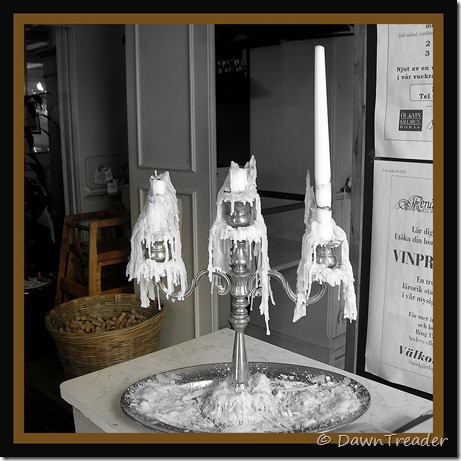 Going out for lunch yesterday with my aunt and uncle who were visiting, I came across this candle holder.

It led my thoughts back to the Discworld novel Unseen Academicals by Terry Pratchett, which I recently listened to as audio book. I find it a bit hard to write proper reviews of books I have only audio memories of, i.e. without being able to go back to the text and check details and quotes etc. But I thought I’d write down a few impressions anyway.

The main story in the book – I suppose – is about the Unseen University forming a football team. But, as two quotes from the book say (I found these on the internet):

You're saying that football is not about football?
It's the sharing, she said. It's being part of the crowd. It's chanting together. It's all of it. the whole thing.

One new Discworld character in this novel is Mr Nutt, who is a candle dribbler at the Unseen University. Because at a Wizards’ University, you cannot leave an important thing like candle dribbling up to chance and wind. It is a job that takes some skill!

So that’s why Mr Nutt came to mind for me when I saw that candle holder.

Mr Nutt of course also gets involved in the football theme and team. And in the midst of it all, he makes some discoveries about himself and goes through a sort of identity crisis; as do some of the other characters, although in different ways. References to Freudian psychology will probably amuse anyone interested in that sort of thing (at least they amused me). In the book, hypnosis of origin from Überwald is used to bring out hidden secrets.

Überwald in the Discworld effectively comprises two utterly distinct societies; the dwarfs, who exist below in their cavernous cities and tunnels, and everybody else, who live above. By tradition, the laws of the surface people do not apply underground, and vice versa.
(Wikipedia article on Discworld Geography)

Actually, my Quotation of the Week in yesterday’s blog post (about mistaking oneself for somebody else) might be said to fit in quite well with Mr Nutt. Although…

No, I’m not going to reveal the details.
You’d better read the book to find out!

As usual, even though Unseen Academicals is No 37 in the Discworld series (and by now I have read them all), I don’t think this one requires you to have read any of the previous ones to be able to get some enjoyment out of it. All that is required is that you’re prepared for a fantasy world which is like and unlike our own world at the same time.

To finish off with, here’s the definition of:

Dribble (v.tr.)
1. To let flow or fall in drops or an unsteady stream.
2. Sports a. To move (a ball or puck) by repeated light bounces or kicks, as in basketball or soccer.

Posted by DawnTreader at 13:54

this is some serious dribbling of candle wax, i have made dribbles before in my real not fantasy world, but nothing like this. love the photo of something like I have never seen before.

Gosh, this sounds like a great series, full of whimsey, depth, unusual characters, and lots of fun. Where was that dribbled candlestand, in a restaraunt?

@GB: Could you expand just a little bit on that some time when you're actually awake...? (LOL)

I could perhaps expand a bit. But then I'm not really sure. Terry Pratchett confuses me. And when I'm confused I, well, I'm confused and that doesn't make for coherent comments.