The Miracle of Printing 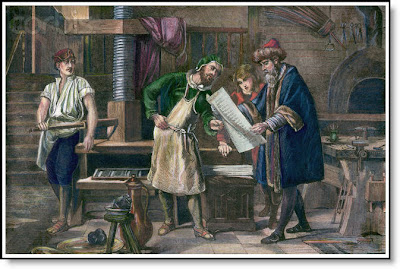 Gutenberg reviewing a press proof. Source: Wikipedia.
One quite important event took place "in the margin of my life" this week - I finally got a new printer, which is also a scanner, which is also a copier, which can even be used while the computer is turned off. What a long way we have come since the days of Gutenberg's first printing press!

Actually, one does not have to go that far back in history to stand in awe of modern technology. In the mid 70's, when I started working as a secretary, it was still pretty advanced to have an electric typewriter in the office. For copies you used carbon paper; or if you wanted more copies you could write on stencils, which were then put through a huge manual stencil copier, a messy process which usually left you with ink stained fingers.

One of the first offices I worked in was at a small paper mill. There we also had telex machine. When this started ticking, the whole staff used to gather around it, excited to see if it might be an order coming in. Sending was a more complicated process - you first had to use a special kind of typewriter to punch holes in a narrow strip of paper, then put the strip of paper through the machine (where it sometimes got stuck or ripped off and you had to start over...). But when sometimes after just a few minutes you got a written reply back from another country, it felt like a miracle. 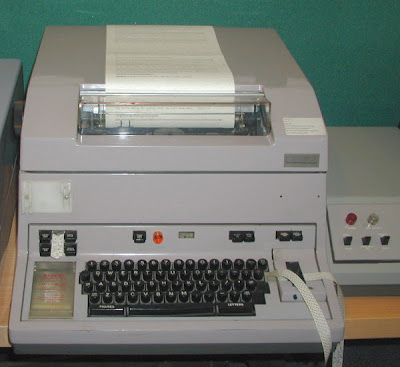 Telex/teleprinter
32 years later, here I am, finding it quite normal and necessary to have two computers, wireless network, broadband internet connection, and a combined printer-scanner-copier, for private use in my own home... Who would have thought it?! 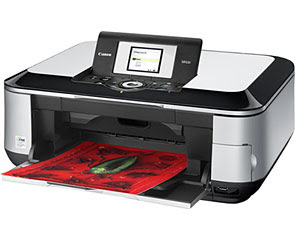 Posted by DawnTreader at 18:41

Congrats on your new printer. It really is amazing how much the world has changed. I'm so old that the personal computer was a novelty when I was in my late 20s/30s. It was a HUGE innovation when the memory typewriter was invented - and quite a blessing not to have to use carbon paper any more. In fact I still remember the days of mimeographs. Times have changed indeed.