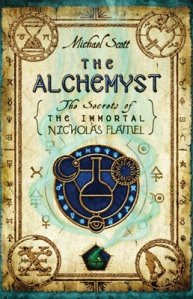 The Alchemyst: The Secrets of the Immortal Nicholas Flamel
by Michael Scott (link to Wikipedia article)

Text on the back cover:

He holds the secret that can end the world.

The truth: Nicholas Flamel was born in Paris on September 28, 1330. Nearly 700 years later, he is acknowledged as the greatest Alchemyst of his day. It is said that he discovered the secret of eternal life. The records show that he died in 1418. But his tomb is empty.

The legend: Nicholas Flamel lives. But only because he has been making the elixir of life for centuries. The secret of eternal life is hidden within the book he protects; the Book of Abraham the Mage. It's the most powerful book that has ever existed. In the wrong hands, it will destroy the world.

That's exactly what Dr. John Dee plans to do when he steals it. Humankind won't know what's happening until it's too late. And if the prophecy is right, Sophie and Josh Newman are the only ones with the power to save the world as we know it.

Sometimes legends are true. And Sophie and Josh Newman are about to find themselves in the middle of the greatest legend of all time.

The reason I picked up this book was because it was suggested reading for September in Jo's Book Nook at the Leaky Lounge (Harry Potter) Forum; even though it is a post-HP book, while all the previous books have been "classics" recommended (in some context or other) by J.K. Rowling.

Having read it, my general impression is – yes, this book is definitely post Harry Potter; and feels to me like rather a bleak attempt to accomplish something similar but different enough to avoid being accused of ripoff.

One similarity is intertwining the modern world with a magic world of surviving alchemists (besides Nicholas Flamel and his wife Perenelle, also John Dee, 16th century alchemist and consultant to Queen Elizabeth I), mythical creatures, and ancient gods and goddesses. In Michael Scott's world, the alchemists and even creatures such as vampires and the Morrigan do not stay hidden in a wizarding world refusing to use modern inventions like electricity; but take full advantage of technology such as cars, jet planes, cell phones, laptop computers and the internet.

The most ancient powers, though – called Elders of the first generation - seem to prefer to enclose themselves in a Shadowrealm that (much like Rowling's Hogwarts) quickly drains the power out of any modern battery.

The basis of Scott's ideas is that before the humans (humani), the earth was inhabited and ruled by an Elder Race. "They were creatures that looked human – sometimes – but had the powers of gods. --- The first primitive humani worshipped the Elder Race as gods and demons --- The gods and goddesses of Greece and Egypt, of Sumeria and the Indus Valley, of the Toltec and the Celt, existed. They weren't different gods, however; they were simply the same Elders called by different names."

(This is really pretty much the same idea that Tolkien expresses in his Silmarillion, although Tolkien speaks in terms of Valar and Mayar and Elves etc.)

As introduction to make kids curious about old myths and history, and wanting to look things up on the Internet, I suppose Scott's Alchemyst might work. (I have no kids to try it out on.) Personally, having read the works of fantasy by authors such as Tolkien, Lewis, Rowling and Pratchett, I find Scott's Alchemyst rather boring. There is a lot of action, but no real depth to the characters, and the choice of mythical gods – or, come to think of it, so far only goddesses? – seems random. It disturbs my sense of context to have Hekate (from Greek mythology) living in the tree of Yggdrasill (from Old Norse mythology), fighting against the Morrigan (Celtic crow goddess) and Bastet (Egyptian cat goddess). I find myself getting irritated, rather than curious. If the names had been left out, I might possibly have found it intriguing to figure out the references, but with the names there, they are too obvious (and at the same time, the combinations seem wrong).

One idea I did like in this book was that the awakening of magic is connected to a general heightening of the senses, which is not all pleasant. (Scott is hardly the first author to have emphasized that thought, though. ) And also the thought that change, once begun, cannot be reversed. But – that's about it… I also find it a bit overexplicit, really, to have the teenage girl going through the "awakening" before her male twin...

Whether I'll read the rest of the series seems doubtful at the moment, but remains to be seen!
PS. Oh - I forgot: I did -indirectly- learn something from this book I didn't know before. Terry Pratchett didn't invent Golems... It never occurred to me to look them up before, but I did now, when they appeared in Scott's book as well. Seems they belong to Jewish legend. And there is a connection to alchemy as well.
Posted by DawnTreader at 11:42

Great review! I've wondered about this book, and it's nice to get a synopsis written by someone with similar literary tastes to my own. Thanks!