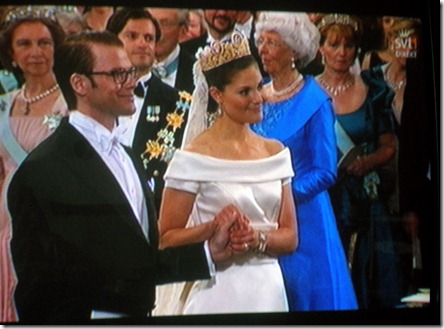 I could not resist getting some shots “of my own” of the wedding between our Crown Princess Victoria and her Daniel; even if only from the TV screen… 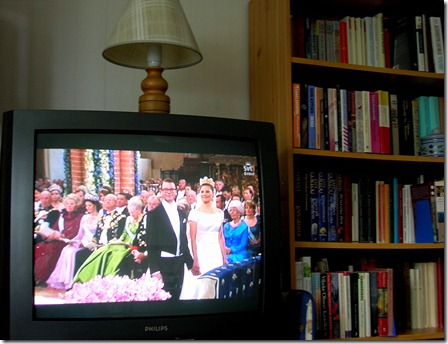 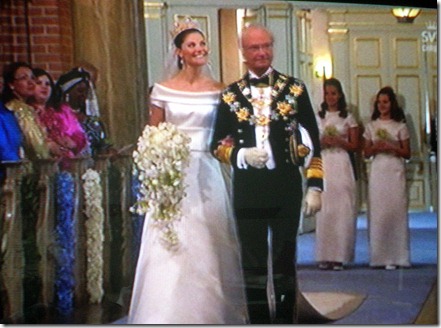 3:40 pm
The King escorted his daughter into the church. 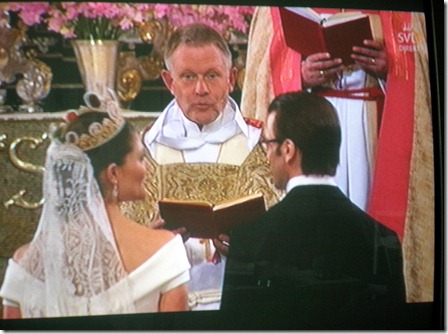 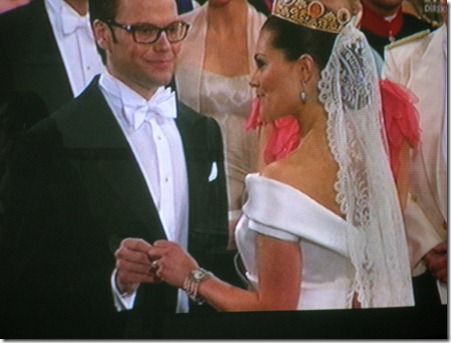 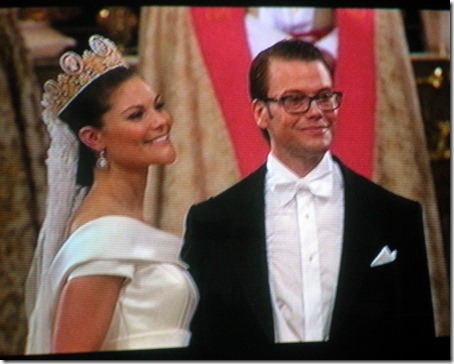 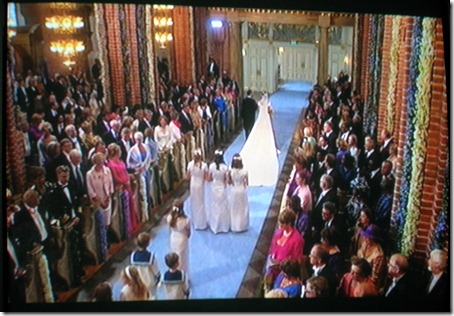 4:25 pm
Leaving the church as husband and wife – and Daniel on top of all with a bunch of new titles: Prince, Royal Highness, Duke, and Knight. 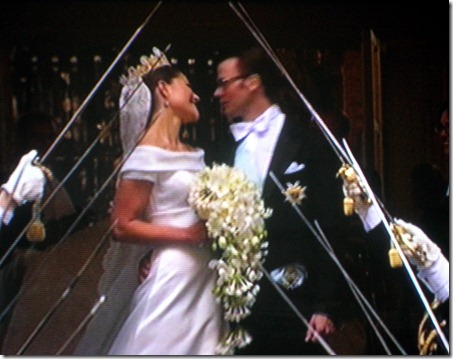 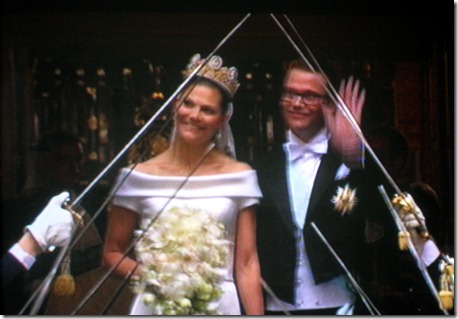 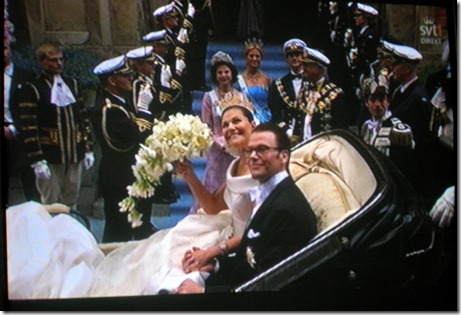 It did not rain! - and the 7 km ride through the streets of Stockholm in an open carriage went all according to plan. 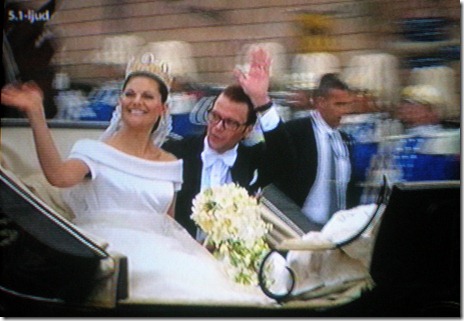 The Prince has obviously been practicing his waving. 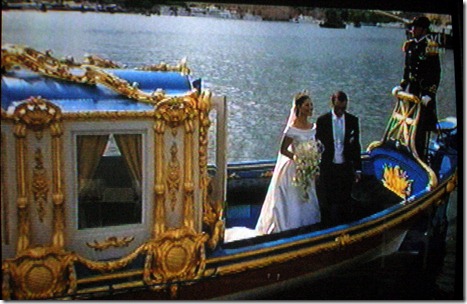 The boat ride on the royal pleasure barge also went according to plan. 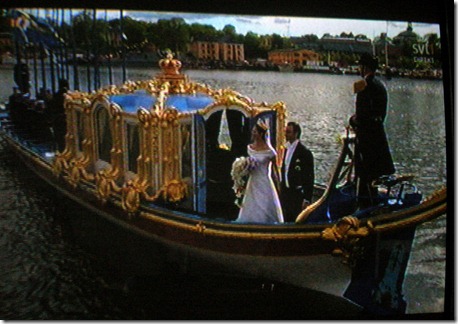 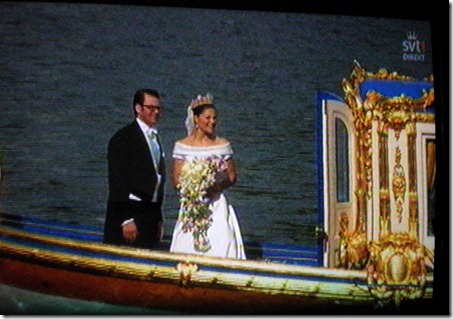 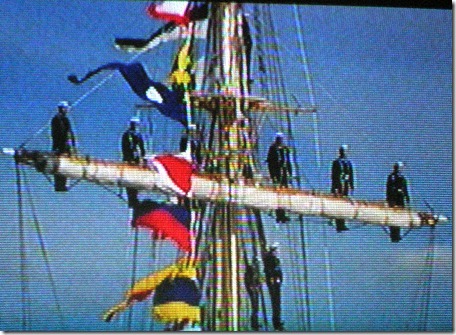 Greetings from big ships… and a submarine: 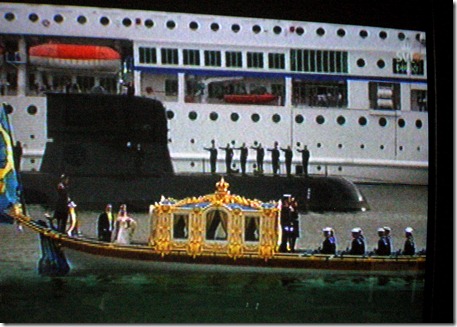 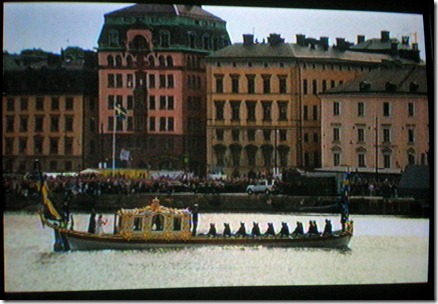 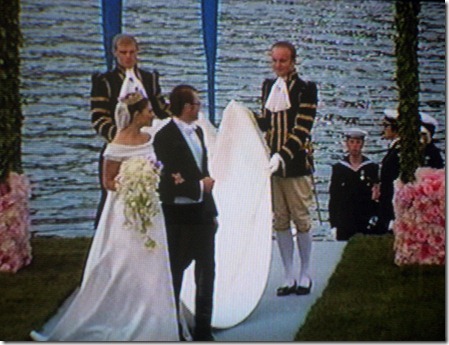 5:40 pm
Landing at the Stockholm Palace. 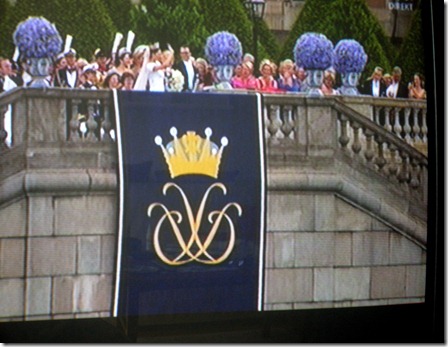 The terrace in front of the Palace, decorated with the newly-wed couple’s own brand new monogram.

Posted by DawnTreader at 19:33

these are wonderful, it is just like you are a reporter and were THERE. thanks for sharing. this is way cool

What SPLENDID pictures! You must have a pause button on your T.V. You know that I post pictures I take from the T.V. and also the newspaper. I don't care where people's pictures come from, as long as I get to see them! These came out very good, you'd never know they were on T.V. I do like her dress. That little gilded pleasure barge looks like something Cleopatara would have liked to take for a spin or two around the Nile. The pictures of the happy couple in the middle of the swords is unusual and kind of cool. And is that real SAILORS standing up on that ships pole??? I thought it was birds at first. Oh, gosh! i hope the newlyweds happiness isn't short lived. It might be shattered once they get a look at that little red dress.

I don't have a pause button on my TV - it's not even a flat-screen. I just enjoyed myself testing what I could do with the camera. Some shots came out all blurry but with some I was more lucky. Using the camera also did make me feel a bit more like I was "there" rather than just watching TV.

And yes, there were sailors up in the masts of the big ships; this apparently (also according to the TV reporters) is a formal salute on occasions like this.

I loved seeing more of your country in these. The pics of the sailors in the rigging were great too.